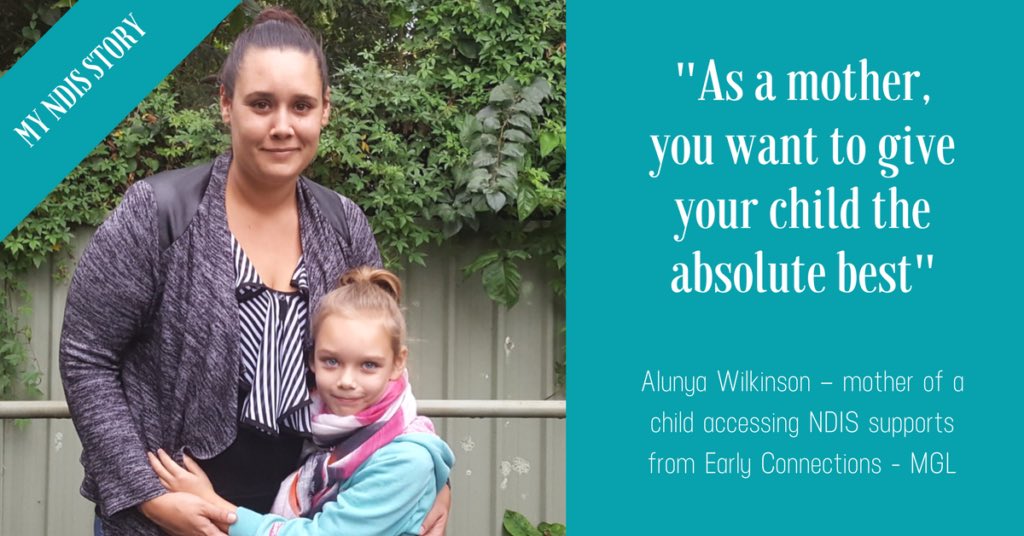 Alunya admits before her daughters NDIS plan was approved she was in a panic. But she says parents shouldn’t be concerned.

“Janalia is now getting more support than ever and she is becoming so much more independent all because of the NDIS,” said Alunya.

Early Connections Alliance offers Early Childhood Intervention for children aged 0 – 12 with developmental delay or disabilities. We currently support families through the process of transitioning to the NDIS.

“My mind is definitely more at ease, thanks to Early Connections and the NDIS everyday living is easier,” said Alunya.

The Manning and Great Lakes team have successfully transitioned most of their families, including Janalia, to the NDIS.

The scheme became available in Manning and Great Lakes 12 months ago and from July 2017 is rolling out across the Mid North Coast from Port Macquarie to Coffs Harbour.

Alunya met with her Early Connections Key Worker to map out 6-12 months of goals for Janalia.

“That was the hardest part really, prioritising goals and ultimately how you could achieve them,” said Alunya.

Thanks to Early Connections the process was simple and relaxed. The questions were direct and easy to answer to help coordinate the individual plan.

“It was a great help having the Early Connections Key Worker in the meeting. Someone who knew my child and what she needed and who could ensure nothing was left out,” added Alunya.

“The day I received the phone call to say Janalia’s plan had been approved, and to then hear what the package amount was, was the best news ever.

As a mother you want to give your child the absolute best and now Janalia is able to see therapists weekly, for them to visit her in the school environment, talking to the teacher one-on-one about the best ways for her to learn.”

Early Connections developed a strong action plan and key learnings from the rollout of the NDIS in Manning and Great Lakes.

Our teams across the Mid North Coast are ready to help families and children like Janalia navigate the NDIS.

Connect with us for more information. As a registered NDIS provider Early Connections can help you: