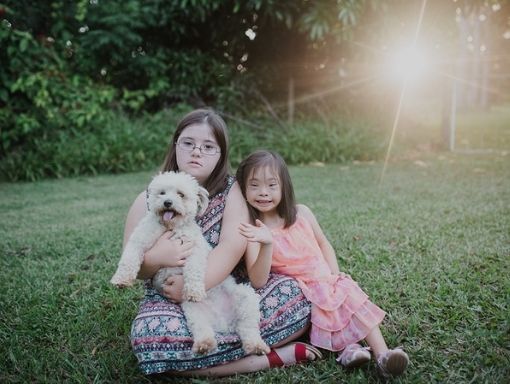 Lyn and Glen Legge have four girls, Emma, Lisa, Hannah and Tiana, as well as two granddaughters.  The family live in Coffs Harbour and enjoy camping together.

Hannah was born with Down Syndrome and was referred to Early Intervention Coffs Harbour at six weeks old.

“It was a warm, safe environment that embraced our family at a time when we were still coming to terms with what our daughter’s future would look like.  Hannah attended Early Intervention until she was five years old and started school,” said mum Lyn.

When Hannah was eight years old they adopted one year old Tiana who also has Down Syndrome and attended Early Intervention until she started school at five.

During their time at Early Intervention the girls were well supported receiving speech therapy, physiotherapy and occupational therapy.  The early educators supported the girls in group sessions, in the home and in their child care settings, upskilling staff on how to fully include and teach the girls.

“The staff provided training and the skills we needed, as parents to help our girls to reach their potential.  When Hannah was three, we did an intense ten week speech training program, involving us as parents and Hannah. We  saw Hannah’s speech explode, a program that we repeated when Tiana attended,” added Lyn.

Tiana had complex medical needs including being fed by a peg into her stomach.  Through the guidance of the speech and occupational therapists, Tiana gradually tolerated food and drinks orally, so that the peg was eventually able to be removed.

Learning to crawl and walk were all achieved through the guidance of Early Intervention. Simple things like holding a pencil, to drinking from a straw, were huge steps.

“The biggest thing that attending Early Intervention did for our family was allow us to see a positive future for our girls.”

Where are they now?

Hannah is now nineteen and has finished year twelve in a mainstream high school, endearing staff and students with her can do attitude.  She represented her school in the swim team each year and has gone on to compete in Ocean Swims, cross country and triathlons. Hannah is a regular at the local gym.  Hannah is attending TAFE to gain a Certificate III in Hospitality and is doing work placement. Hannah is an enthusiastic member of a local drama group and has recently performed in her second musical and will be singing with a choir at the Carols by Candlelight.  Hannah performed a monologue in the Eisteddfod and received a highly commended for her performance.

Hannah has maintained friendships from school and travelled with a group of friends to Hawaii this year.  Hannah enjoys a full and productive life, with all the hopes and dreams of any girl her age, moving out of home, travel, a career and even the hope of a little romance.  Hannah has been invited to return to her old primary school at the final assembly and talk to students about her achievements and her time at school.

Hannah’s next goal is to find paid employment.

Tiana is twelve years old and excited about the prospect of following in her sister’s footsteps at high school.  Tiana still struggles with many things her classmates take for granted, but is well liked and thrives on the encouragement of her classmates.  Tiana loves drawing and her teacher says she has a real artistic flair. Tiana has represented her school in athletics and certainly had the biggest cheer squad.

Tiana attends Girl Guides and is preparing for her first camp.  Tiana trains with the Special Olympics gymnastics team and has competed in two competitions.  She is very proud of her trophy and medals.

Tiana’s goals are to settle in well at high school, to master touch typing and to improve her communication skills.

“I am so grateful that such a quality service was available to our family in a regional area, this is so important.  We spent so much time travelling to Sydney for medical appointments, we appreciated the access we had to therapies in our local area and as a place to connect with other families.

We look back fondly on our time with Early Intervention and are so grateful not only for the skills that we learned there, the emotional support but most importantly for removing the fears and letting us see the possibilities.

So my advice to new parents is look at the possibilities, give your child the opportunities and they will surprise you, but love them for the beautiful child they are. I am a strong advocate for inclusion, the research supports it as being the best option not only for our children but for their classmates.  So many opportunities have opened up for my girls, because they are out their, visible in their community.”

Thanks to the Legge family for sharing your early intervention story.

Do you have a positive story to share about your experience of Early Intervention on the Mid North Coast? We’d love to hear from you. All your stories help us to share our impact so we can support children and families into the future.